Tailgating is a serious contributor to the nation’s road toll, but solutions are stalled.

It’s hard to picture Phillip Adams on the run but when an eighteen-wheel behemoth has you in its sights on a dark and lonely highway even veteran polemicists get spooked.

One spring night in 2008 Adams was driving his sleek Citroen to his Hunter Valley home when he was confronted by a semi-trailer that appeared intent on mowing him down.

The illustrious broadcaster and polymath was forced to seek sanctuary in a small town off the highway.

“I managed to get in a side street and hid assuming he’d thunder past and feel some victory that he’d vanquished me”, says Adams.

“To my astonishment I saw him stop the truck and block the road then climb out with a crowbar obviously intent on smashing the windscreen then smashing me. I just shoved it into drive, narrowly avoided knocking him over and could only get out of the street by manoeuvring along the footpath.”

Adams immortalised the saga in his newspaper column next day but the truckie was never caught.

Few will endure such a harrowing re-enactment of Stephen Spielberg’s 1971 film Duel, in which a colossal tanker terrorises a travelling salesman across the byways of California’s Canyon Country. But as tailgating – failing to keep sufficient distance from the car in front to allow safe stopping – has become all too common on Australian roads growing research shows it is taking a significant toll on drivers yet little is being done about it.

In April, nose-to-tail collisions again topped the annual AAMI Crash Index accounting for nearly a third of vehicle collisions. In 2013, VicRoads reported 2585 rear-end collisions leaving 10 people dead and 475 people seriously injured. Tailgating is a major cause of rear-enders, but driving up close to the boot of the car in front is fast becoming the norm.

A US study found at 100 kilometres per hour 95 per cent of motorists will leave a gap less than the mandatory 2 seconds or 11 car lengths. Half of drivers only leave four car lengths which, on standard reaction times, makes crashing a near certainty if the leading car hits the brakes.

With 40 per cent of compulsory third party insurance claims coming from rear end collisions the Motor Accident Insurance Commission of Queensland has funded a major study into “close following” driving.

Lead researcher on the study Dr Judy Fleiter, from the Centre for Accident Research and Road Safety at Queensland University of Technology (CARRS-Q), says it will examine CCTV footage of black spots, profile those most likely to offend, and ask drivers how they measure a safe gap.

But tailgating can hurt even if you don’t crash. Dr Bryan Higgs, a Postdoctoral Fellow in Civil Engineering at the University of Memphis, re-created the pressure cooker of modern roads in a driving simulation that gave participants a five minute deadline to make their destination. Higgs upped the ante midway, sandwiching drivers between a dawdling car and another motorist tailgating and blasting the horn.

How did drivers react? Almost all decreased the distance to the car in front, on a baseline where most were leaving gaps of 1.5 seconds and the most hawkish followed at just 0.5 seconds.

Says Higgs: “Aggressive drivers still responded like the other drivers, but just became more aggressive”, with one reducing the margin to a heart-pumping 0.25 seconds.

Read the full feature in the Age newspaper here 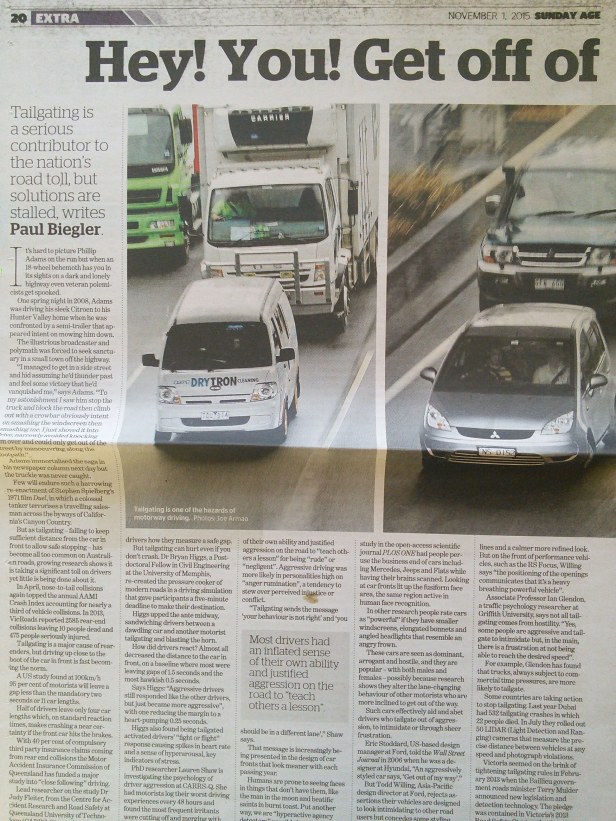