High-vis cyclists: when it comes to safety on two wheels is brighter really better, or have we been sold the great fluoro fallacy?

VicRoads advises cyclists to “wear a bright top day and night” and in 2014 mandated learner motorcyclists wear an approved high-visibility vest or jacket. In 2013 New Zealand coroner Ian Smith went further, saying high-visibility clothing for cyclists was a “no-brainer” and should be compulsory. Meanwhile, the City of Melbourne Bicycle Plan, released in March, puts a target of zero fatalities and serious injury crashes by 2020 front and centre.

“I actually did buy a bright yellow fluoro jersey and every time I put it on I felt like I lit up. It just didn’t feel right,” says Spurling.

So, does Spurling’s sombre cycling chic put him at risk of ending up, literally, a fashion tragic?

Garry Brennan, senior policy advisor at Bicycle Network, is not so sure.

It seems baffling that a peak cycling advocacy body could question the value of high-vis clothing, but evidence is gathering behind it. Dr Sandar Tin Tin, research fellow in the faculty of medical and health sciences at the University of Auckland, recently finished a six-year PhD study of cyclist visibility.

“Being visible is different from being noticed. Visibility is about standing out from the background and cyclists can enhance that, especially in poor weather or low lighting conditions, by wearing high-visibility materials,” says Tin Tin.

“But being noticed is different because it depends on drivers’ attention to and expectation of the cyclists,” she says.

Read the full feature at the Age here 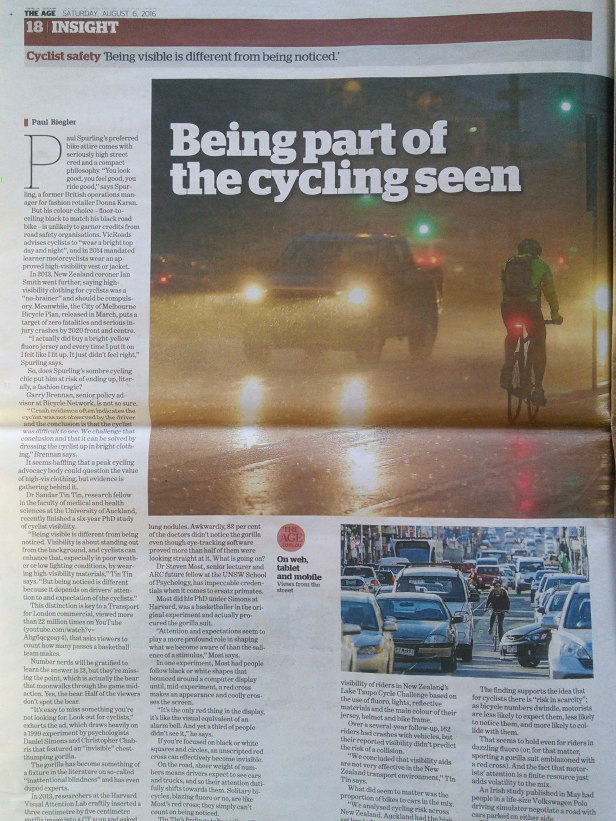