Nothing works. Treating patients with a placebo, even if they know it’s “fake”, is doing some good.

Damien Finniss was working as a physiotherapist when, on a still winter’s afternoon in 2001, he set up his treatment table in a shed at the perimeter of a Sydney footy ground. As players came off with sundry aches – a pulled hammy here, a calf strain there – Finniss ministered to them with therapeutic ultrasound, a device that applies sound waves to the injured area with a handheld probe.

“I treated in excess of five or six athletes during the training session. I’d treat them for five or 10 minutes and they’d say ‘I feel much better’ and run back on to the training field,” recalls Finniss, now a medical doctor and Associate Professor at the University of Sydney’s Pain Management and Research Institute.

“But, at the end of the session, I realised that I’d, basically, had the machine turned off.”

Forgetting to switch his device on at the wall, to no apparent detriment, was a light bulb moment that led Finniss to become a leading researcher on the placebo effect – the power of treatments with no active ingredients to heal the sick, sometimes dramatically.

“I’ve seen people who have had terrible arthritic pain for five or 10 years, receive a placebo injection, stand up, and walk straight out,” says Finniss, referring to patients in a clinical trial he ran.

Indeed, sham treatments in the form of sugar pills, fake creams and saline injections have delivered relief to people with depression, psoriasis and Parkinson’s disease, to name a few. But the placebo has an image problem which has made it something of a dirty little secret in the medical profession.

It was widely thought that, for a placebo to work, doctors had to deceive patients that they were getting the real deal, and that’s problematic for a profession keen to promote informed consent.

But a new study casts doubt on whether deceit is necessary at all and, along with a swag of research showing some remarkable placebo effects, raises big questions about whether placebos should now enter the mainstream as a legitimate item for doctors to prescribe.

Read the full feature in the Age here 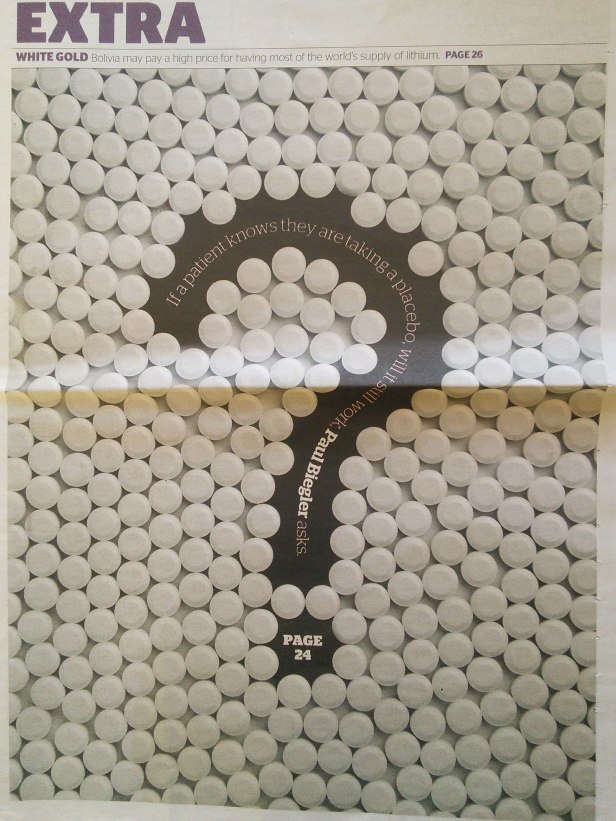