This year, as the worlds of science, technology and literature marked the bicentenary of Mary Shelley’s Frankenstein, in some laboratories human cells were being coaxed into a tiny version of the organ that most defines us. Depending on where you sit, these “minibrains” – formally known as cerebral organoids – could rival Shelley’s creation on the monstrosity scale, raising deep moral questions about consciousness and the nature of humanity.

But they also promise hope of a cure for illnesses ranging from childhood epilepsy to Alzheimer’s disease and brain cancer.

I’ve come to Melbourne’s Florey Institute of Neuroscience and Mental Health to hunt a minibrain down. I’m expecting to find it in a dish, on a bench or perhaps in a fridge. As it happens, the first one we stumble upon is in the bin. A special bin for biowaste, of course. The neural tissue has died after serving its purpose and is now merely a smudge of pink on a plastic slide. Still, it seems inconceivable that this miracle of science could qualify as rubbish.

The contrast becomes more extreme when I sit down to chat with Florey Institute director Professor Steven Petrou. He is leading research that creates organoids to mimic the behaviour of the brains of children with rare, debilitating forms of epilepsy.

“Some of these kids can’t speak, are not mobile, they sit in a cot, they have 20 seizures a day and they die when they’re 12. So, absolutely devastating neuro-developmental disorders,” he says.

The researchers take skin cells from the children, turn them into pluripotent stem cells that can form almost any tissue in the body, then direct them to become neurons. Through a microscope you can clearly see the slender bodies of those brain cells afloat in a watery matrix. Hook them up to electrodes and you get something mind-bending. These guys are talking to each other – the computer shows spikes of electrical activity as the neurons fire.

Read the full article in the Sydney Morning Herald here 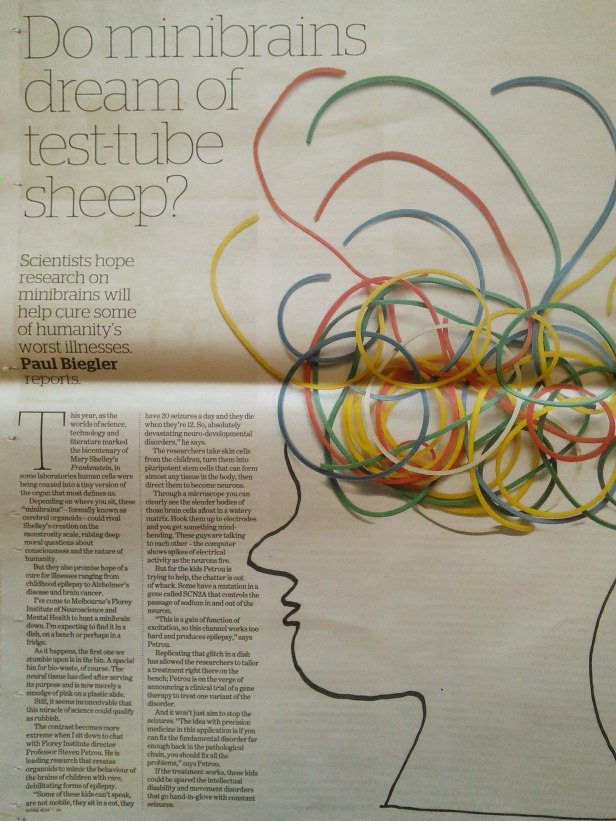